Pixar goes all Scottish with their latest film about a young princess facing her destiny.  Princess Merida is a tomboy, who doesn’t take kindly to being married off, so runs a way, meets a witch and….  that’s all I’m going to give away. 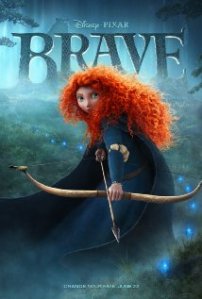 It is a nice enough story with the great quality that you expect from Pixar (apart from the 3D stuff – more later).  The soundtrack is lovely and really made me think about getting hold of the music though I haven’t yet.  Lastly the voice work is outstanding with Billy Connolly, Emma Thompson, Robbie Coltrane, Julie Walters, etc.

The movie is dedicated to Steve Jobs with this quote at the end credits: “Dedicated to the memory of Steve Jobs, our partner, mentor and friend”.  There is also a Lord Macintosh character and I noticed a few times that we saw Merida taking just one byte out of a apple ;-)

3D::  I’m not a fan of 3D movies but since it is supposed to be better in cartoon format than live action, and since the next available showing was in 3D there seemed little point in avoiding it.  The 3D effects were nice enough when you notice them but at no point do they *in my opinion* add anything to the plot, or movie going experience.  Please don’t encourage studios to use this awful format.

This entry was posted on Sunday, August 26th, 2012 at 5:00 pm and is filed under movies. You can follow any responses to this entry through the RSS 2.0 feed. You can leave a response, or trackback from your own site.