I used to blog about food a fair bit, but got out of the habit, tonight is worth sharing…

The Rum Shack on Pollokshaws Road, opened about a year ago and is exactly what you expect from a place called The Rum Shack – lots of Rums (their facebook site claims 50, I didn’t count), Caribbean food and reggae music. 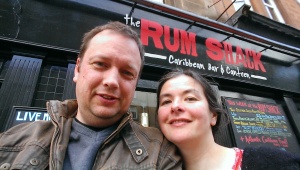 Being child free for a night meant we were out on a school night – but being parents of a young child meant we were in and out again before the cool people made the place look busy, in order to get to bed at a sensible time :-(

However, there was time for a couple of rums.  The bar staff were knowledgeable and after a few questions and suggestions….  “Yea I’ve tried that”  “Is that like their previous one”  “What’s new from Barbados?” I had an Angostura Cask Collection No.1 and later a Plantation Grande Réserve 5 years.  Both were very nice, but the Angostura was amazingly smooth and I’ve started trying to track down a bottle (limited edition with only 9,600 bottles available worldwide).  But I was supposed to be blogging about food not rum…

The Rum Shack’s menu isn’t extensive but from my limited Caribbean experience (honeymoon in Barbados) it seems authentic enough with Salt Fish, Curry Goat and rice-and-peas of course. We shared a starter of Accra -Salt Fish mixed with herbs and seasoning, shaped into balls and fried till golden. This came with the house hot sauce which nearly melted my lips and I thought I wouldn’t taste anything else all night!  The hot sauce isn’t messing and was way beyond my limit.

After some water and about 10min my mouth had calmed down enough to carry on.

Our main courses were Rum Shack Fish-n-chips which had a jerk style coating, sweet potato chips and lentils and Jerk Chicken, served with rice and peas and corn on the cob.  It was all absolutely delicious, the flavours weren’t overwhelming or too hot, everything was perfect.  Except, in my opinion, the portion size was a little small especially given the prices, e.g. 3 small balls of fish.  It isn’t extortionate but neither is this a cheap choice so you really don’t want to leave still feeling hungry.  That said, I would certainly like to go back and give it another try for both the excellent food and the chance to try different Rums!

Comments Off on Food: The Rum Shack |

This is my favourite restaurant in Glasgow!

Tonight D and I went along, and shared a beef burger and Felafel burger, they were both absolutely fantastic!  I’m not sure what spiced up the beef burger but every mouthful was a delight.  The burgers were served with chips and side salad but really just saying that doesn’t do it justice.  The chips were hand cut and perfectly fried, salty and not the slightest bit greasy or overdone.  The ‘side salad’ was an exciting mix of leaves, beet, peas, etc.  and just enough to add to the disk and not overpower it.  While the burgers were more than adequate we decided to try a pudding simply for the sake of completeness and went for sticky toffy pudding – this was the best sticky toffee pudding I have ever tasted perhaps with the exception of the Downe’s Sticky Toffy pudding that I must try again just to make sure :-)

I do think the Ivy doesn’t have the most welcoming entrance (from Argyle Street) , with big heavy dark doors, and once in at first it appears to be a bar.  But as you move through to the back (or come in the other door from Kelvingrove Street) the small restaurant areas is very comfortable with dark lighting and chill/funky music at a decent level but not distractingly loud.

All that aside, the reason I discovered this place was a recommendation from the guys at The Good Spirit Company because this bar boasts around 100 different Rums and has staff who know what they are talking about when it comes to Rum!

Tonight, I started with a Cuban classic cocktail “El Presidente” (made with Diplomatico Reserva Exclusiva, which is a fantastic rum on its own!).  At the end of the meal I asked for some advice on another rum to have, had a short conversation for the waiter to figure out what I have tried and enjoyed, then he brought three bottles over to discuss and choose from. I was very very pleased with the Foursquare 66 I ended up with – straight to the top of my wish list of Rums to buy!

playing catchup here since we went to the Ivy last Saturday, but better late than never:  the Ivy Bar (as it seems to be called, rather than ‘the Ivy’)  is on the corner of Argyle Street and Kelvingrove Street … in Finnieston – which seems to be the up and coming area of Glasgow for trendy bars and restaurants. It has been recommended to me various times now as the best selection of Rums in Glasgow. It turns out they claim to have the largest selection of Rum outside of London with around 90 different varieties on offer.  However, lets start with the meal.

We really didn’t know what to expect of the place as it looks like a very modern bar with a restaurant section towards the back and I’m not sure what their focus is on – food or drink.  The menu content was basically chicken, steak, burgers & fish and chips, but obviously described in a nice, fashionable way…”Beer battered coley fillet and chips with mushy peas, lemon and tartare” for example.  However when the food did arrived we were very pleased with the standard of everything on offer.  D had a steak while I had the fish(above), both dishes were superb and not too extortionate and we shared a gorgeous sticky-toffee-pudding to finish.

Towards the end of the meal I finally made my way to the bar to ask for a recommended Rum.  This process started by me telling them of a few that I liked and then I had a sniff of a few bottles.  The nicest smelling turned out to be £12/shot, so I had to miss that out this time around but instead had its 12 year old cousin “XM Millennium” Rum from Guyana.  Which I discovered when I got home was the same rum I selected as my favourite at the rum tasting last year!

Suffice to say I can highly recommend the Ivy’s food, selection of Rums, friendly service and knowledgeable bar staff who will help you find just the right Rum for you!

That time of year again to have a look over what I’ve blogged about and review what the year has been like ( see 2010, and 2009)

MOVIES watched at the cinema…

July: we did a wee tour of England, visiting relatives in Coventry then having a few days in Yorkshire and the Lakes.

August:  CLANkidz not always seen as a holiday, but still it isn’t ‘work’ and it is in St Andrews so I think it counts

Feb: I got Married, D’ moved into my small flat and we began our married life of bliss.  The reality is that it is difficult to find a balance in everything when married, it hasn’t been easy but it has been a lot of fun.
Also, in Feb, as mentioned we went to Barbados and I found a new interest – Rum!
Oct: Put my flat in Woodlands on the market and it sold within three weeks
Nov: After looking at a lot of places we bought a house in Scotstoun
Dec: Moved into the new house, filled it up with clutter immediately, then had Christmas parties.  What a good month!

I discovered Rum in Barbados on honeymoon in February this year.  I may have had the odd Bacardi and coke before but Barbados is the home of the oldest rum in the world (Mount Gay) and the best place to be truly introduced to some different rum tastes – straight or mixed.

In the few months since then I have been doing some serious ‘research’ into some different types of rum and different ways to drink it.  So far I would say, if it’s clear mix-it, if it’s dark try it straight first.  I still think this isn’t a bad ‘rule of thumb’ but tonight I discovered a lot more.

The Good Spirit Company 23 Bath Street, is the best shop I’ve found for Rum (other spirits are also available), and tonight was their first evening Rum Tasting.  Having never been to a tasting of any kind I wasn’t sure how it would work but it was very straight forward, informative and above all tasty!  We had 6 Rums to sample and here are my initial thoughts on each one..

The tasting itself was a very good evening, personally I would like to know more background and knowledge about Rum making, history, etc. but there was enough to keep it interesting.  The choices of different tastes was fascinating in that each glass on its own smelled like Rum, but each one was different with its own subtle tones. We took advantage of the 10% discount on the rums included in the tasted by getting a couple of bottles (3 & 4 above), and had a great and very different evening.

Most interesting factoid from the evening: Rum ages tree times as fast in the Caribbean as it would here, so a three year Rum might be equivalent to a 9 year old Whiskey.