I love live shows!  From a school production to a KISS stadium show, I just love the act of humans coming together to create something at a specific time and place.  No matter how rehearsed and managed a live show is each time it is performed it is unique.  Last Wednesday I was reminded just how much I love live shows by going to see Wicked in the Kings Theater, Glasgow.

We bought these tickets over a year ago, and to be honest I wasn’t that bothered about seeing this particular show.  I knew it was the back story of the Witches of Oz, but other than that I hadn’t paid much attention to Wicked in all the years it has existed on Broadway and around the world.  But I do like live shows!

The Kings is an excellent theater and when you take your seats the stage curtain is a map of Oz with a glowing Emerald City at its center, above the stage is a massive mechanical dragon since the whole story could be said to take place in flashback inside the “Clock of the Time Dragon”.

From the opening number it was obvious that a big part of the evening would be the sound.  I know a little bit about sound engineering (really not being modest – just a little bit) enough to be aware of how technically difficult theater sound can be.  The sound at Wicked was unbelievable!  The balance between orchestra and actors was perfect, not a single line or note was missed, the music was powerful when needed or simple, quiet and unobtrusive, the performances from everyone on stage, and behind the scenes was incredible.

Having ignored this musical never thinking I would see it I was intrigued by how exactly it would fit into the plot of the Wizard of Oz, I thought that it was very cleverly woven together with that story, so intertwined that now that we know the story of Wicked, the Wizard of Oz makes a lot more sense.  It is (sort of like) watching Fight Club once you know the big twist at the end – the same story but you can see it from a totally different point of view.

Wicked was fantastic.  Brilliantly performed, staged and produced.  A very good night out!

Comments Off on Theater: Wicked |

RESTAURANTS, blogged about (I don’t blog about every restaurant anymore)…

Following reviews of 2011, 2010, and 2009… here is the summary of my blog posts this year… please note this is only to help me remember things I really don’t know why anyone else would be interested:

Movies (home, but for some reason significant)

RESTAURANTS, blogged about (I don’t blog about every restaurant anymore)…

Monday 21 was a beautiful evening and just the right time to be heading down to Gourock to catch the ferry to Dunoon to see a Bill Bailey gig.  Bill Bailey is one of the stand up comics I’ve seen on TV who I have always wanted to see live.  A few weeks ago I spotted that he was touring some small towns and grabbed some tickets for the Queens Hall. 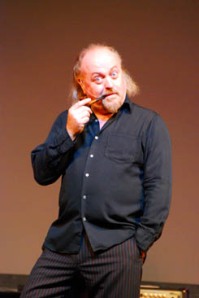 Although I grew up in Gourock and have family in Dunoon I’ve never been in the Queens Hall and certainly never expected to see one of the UKs top comics here.  In part it is that expectation and the building anticipation which made this night so good.  At first all Bill Bailey had to do was walk up and down the stage making the odd comment about the general (run down) look of the theater and a quick impression of the ferry to have everyone in stitches.

After a little while Bill did break into some more substantial material and it was all really great.  The problem I am finding though (and this is why I am posting this more than a week after the gig) is that you really need to have been there.  So you will just need to trust me – Bill Bailey is fantastic, very funny, clean humour and worth catching.

gig: Adam Ant & The Good, The Mad and The Lovely Posse

I never thought I would see Adam Ant on the road again.  But here he was on Monday night playing Glasgow’s O2 Academy with a line up known as “The good the mad and the loveley posse” (with ‘the mad’ referring to himself with his mental health issues).  I actually found myself blown away by how good this concert was, simply one of the best gigs I’ve ever seen, and I’ve found it difficult to put into words why, perhaps it is the concert that I grew up listening to in my head.

The opening song “Plastic Surgery” starts slow with sustained chords and drums but then suddenly takes off to a frantic pace (around 2:10 in this good quality video from the Glasgow gig).  The next five songs came so fast I couldn’t take my eyes of the TWO drummers who must have been exhausted already, but the pace didn’t let up through  – Dog Eat Dog, Beat My Guest, Kick, Cartrouble, Zerox … then Adam was joined on stage by two dancers / backing singers for Deutscher Girls, then Stand and Deliver, and so on

It was around this point that I started to actually notice what was going on.  There wasn’t new material (though apparently there is a CD ready for release), also this wasn’t exactly a retrospective of hits but rather it felt like a back to the roots kind of set.  Adam wasn’t going through the motions by trotting out the big hits but was playing mostly early tracks from the punk days and B-sides.  Some songs were slightly re-interpreted but mostly they were having fun and it showed.  They even played a YMCA spoof called ANTS which was released as a ‘flexi-disk’ 7″ single mounted to the cover of ‘Flexidisk’ magazine (I know because I had it!)

The first gig I ever went to was Adam and the Ants “Prince Charming Review” at the legendary Glasgow Apollo in 1982.  I was about 15 and hooked up with my first real girlfriend during the interval.  Yes there was an interval in a music concert – mainly to give time for the stage to be re-set and Adam to change persona from Pirate to Prince Charming.

However, even though I first discovered Adam and the Ants from their Kings of the Wild Frontier phase withAntmusic, Dog eat Dog, and Kings dominating the charts in ’80, ’81 I then went back to the earlier line up of Ants for the ’79 LP Dirk Wears White Sox.  This opened up a different world for me, instead of listening to the Sunday night Radio 1 chart count down I started discovering music for myself.

Adam Ant was involved in the beginnings of the early Punk rock scene in London in the late 70s, I came to know the Sex Pistols, Siouxsie and the Banshees, Roxy Music, The Clash, etc. through finding out about Adam Ant.  Monday’s concert was how I imagined those early concerts might have been, rebellious, singing songs that Radio 1 would have banned.  The sound was very heavy, with screaming guitar and the inescapable roar of two drummers thudding through your chest as much as your ears.  A fantastic night and a trip back to my childhood (in a good way).

Milton Jones at the Pavillion Theater.  Milton’s style of comedy is fast one liners and puns, meaning that you leave a gig after laughing uncontrollably and can’t quote one funny thing you heard.  Well, almost, I can remember one example at the moment:

” My Grandad achieved his lifetime goal, to become a Lion Whisperer… just before he died. “

All I can say was it was a great night and I do hope more of those jokes keep popping into my head for the next few weeks.

Thanks Ross & Leigh for the birthday present.

The Blind Boys of Alabama at the Concert Hall as part of Celtic Connections. First formed at the “Alabama Institute for the Negro Blind” in 1939, they did the black gospel circuit, playing in churches, auditoriums, and stadiums across the country. Influential for many gospel, R&B and rock ‘n’ roll artists The Blind Boys have been recording and touring for more than 60 years.

In the 1990’s they received two Grammy nominations and performed at the White House. In recent years the Blind Boys were awarded five Grammy Awards and their musical brethren have paid homage to their legacy and their continued relevance by asking them to contribute and collaborate on new projects.

Seeing them being led onstage to their microphones starts to build anticipation, but when they start to harmonize together to the blues rifts of guitar and bass the magic really happens.  As a show, it is fairly simple, three vocalists, keys/organ, a blind drummer (which is a first for me), fantastically talented guitarist and the coolest Bass player I’ve ever seen.

To the SECC for the Scottish Wedding Show!  For some reason people seemed surprised that I would be interested in going to this at all.  I wasn’t the only ‘groom’ in the room but I do think D might have gotten more out of it if she was with her bridesmaid(s).  Lots of cars to sit in and try to have an opinion about, many cakes, dresses, wedding bands, photographers, etc.  what there wasn’t much of was things that are a little out of the ordinary or quirky – so I don’t think we came away with any new ideas.  There really is a massive industry built around weddings and I don’t think I saw anything today about making your marriage last after that one day, or the commitment involved in the sacrament of marriage, which is a bit sad.  Perhaps there is room for a christian marriage preparation course to market itself at an event like this.

After an exhausting afternoon going up and down the isles of this exhibition we had a bit of a rush to get into town and had to grab some place quick to eat before the concert.  We almost walked past Dragon-i, but had a quick check of the menu and from then on everything was quick – and excellent!

Dragon-i is on Hope Street (across from Theater Royal) and is a modern fusion Asian restaurant with influences from Chinese, Malaysian, Thai and Vietnamese cuisine. The pre-theater menu (at £12.95 for two courses) had more than enough choice for us and we had hardly started our complementary crackers before the first course arrived.  Between the two of us we had nothing bad to say about anything we ate.  The service was quick, friendly and efficient, the garlic rice was lovely and flavorsome.  We were slightly rushed but I would certainly like to go back to Dragon-i – my new favourite Asian restaurant!

Lastly, the slight gamble of the weekend was a surprise for D, we went to an RSNO concert in the Royal Concert Hall.

Nice’n’Easy was billed as a celebration of your favourite hits from the 50s, 60s and 70s by such songwriting greats as Bacharach & David and Henry Mancini.  …Music to Watch Girls Go By, Soul Bossa Nova, Do You Know the Way to San José?  The Girl from Ipanema, Strangers in the Night, etc.  This was a fantastic evening of great performances and lots of fun.  Most of the music was nice and familiar with a few new arrangements of songs.  There were lots of nice highlights in the evening but the standout performance was certainly from Peter Grant, check him out if you like that style of music.

By the way – I found out about this concert and got two tickets for the price of one through the 5pm email list!  5pm often has good deals worth being reminded of.