The Lost Symbol, was the long awaited follow up to Dan Brown‘s mega selling “Da Vinci Code“. It was also a big selling book because people just grabbed it as soon as it was released, but it wasn’t as well received. Dan Brown is a strange phenomenon because when The Da Vinci Code first came out everyone was reading it and raving about it, then his writing style started to get ridiculed and it seemed like people who had liked him suddenly noticed that his writing was, well kind of crap, and wouldn’t admit to reading it. 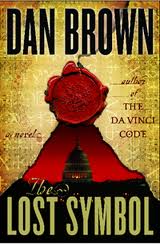 I think Browns ‘genius’ is in writing stories that are so fast paced and exciting that you don’t have time to notice the worst part of the writing style. What does wind me up about Dan Brown’s writing style is when he doesn’t tell us stuff once the protagonists work it out. It is like those annoying pauses some TV programmed put in to try to build the tension… e.g. “He opened the door and suddenly everything made sense. She saw it too, “Now it all makes sense” she said “Yes it does” He replied and they both wonder off to the next chapter together without letting us in on the revelation. It is just manipulative and annoying!

OK, so now that’s out of the way, and given that this is a Dan Brown book I really enjoyed it! This story is set in Washington, DC with Robert Langdon returning as the worlds only symbologist mystery solver. Langdon has to solve many clues to an ancient Masonic mystery in order to save his friend, no the nation, no the entire civilized world and all history since the beginning of man.

So, if you can handle the dodgy writing style and wand a fast paced thriller that doesn’t require too much actual thought then this is worth a read.

[some spoilers here if you haven’t read the first book]

A few months have passed since the end of the last book, Peeta and Katniss are triumphant tributes in District 12 and the Capitol believes they are star crossed lovers.  Part of their duties as tributes is to tour the other districts to make personal appearances, thank the adoring crowds for their ‘support’ even though the tributes from the districts that they visit didn’t survive the Hunger Games.

During this tour of the districts we start to see some signs of revolution against the capital, and that’s as much as I’m going to give away about this book.

Book 1 focused on the games themselves and only had time for a brief overview of the various districts and how the capitol controlled them.  In this book we find out a lot more, and while there is a new hunger game there is perhaps a little less detail of the violence and struggle for survival within the games than in the first book.

However, this doesn’t mean that Catching Fire is any less dark.  In fact it is possibly bleaker and more unsettling than the Hunger Games was.  What makes these books for me (as an adult reader) is the mounting suspense that bridges the story line.  Not only is there the ongoing – how will they get out of the current problem – but we also have the overall fact that the current problem the protagonists face doesn’t really matter when put in context of the ‘big picture’.

Now, obviously this book does suffer from being ‘the middle book’ meaning that in some ways it is a place keeper between the set up and introduction and the conclusion and answers.  However, within that it does have an well constructed narrative of its own and was a very enjoyable read.  I would recommend this!

After much indecision on what to watch tonight we finally found The Best Exotic Marigold Hotel and as neither of us could find any objection we gave it a go.  What a great little film. 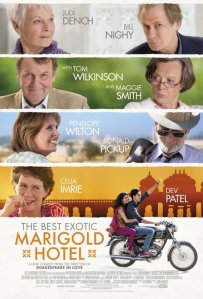 Released only last year I hadn’t heard about this at all, but with Bill Nighy, Judi Dench, Maggie Smith, etc. involved it couldn’t be too bad.  The film is a story about how each of these seven people are dealing with retirement in one way or another.  They each seem to be struggling financially and decide to “outsource” their retirement to less expensive and seemingly exotic India. Enticed by advertisements for the newly restored Marigold Hotel, they arrive to find that it doesn’t fully meet the advertisement.

We gradually get to know each individual, what brought them to this point and how they face the changes brought about by retirement and moving to India.  Some are young at heart, none ready to give up while one is simply on a quest for lost love.  Meanwhile the young hotel owner has to face up to his own problem of love vs family and Indian tradition.

The cream of British actors make up an unbeatable cast provide some excellent one-liners which will make you laugh out loud. There is an occasional moment of sentimentality, but this isn’t laboured, and the Indian culture and setting make the movie visually stunning.

This is a fantastic movie and well worth getting hold of!