So I’ve got a reinstalled MAC that has all my files but somehow they are all over the place. But I’ve heard that if you wander into an Apple Store they might be able to help out with that sort of thing.

However, it was more like one of those Carlsberg adverts – “we don’t do computer stores, but if we did… ” when you walk into the Apple Store there is a sense of space, staff are available but not pushy -compared to the hunt-the-staff game you have to play in PC World- The full range of apple desktops, laptops, ipods, etc are on display and available to try out hands on. Not locked away from the poor customer who might get the shiny stuff dirty.

OK, so apart from this feeling of being in some kind of heavenly realm the best is yet to come.

Up a very cool ‘glass’ spiral staircase you reach “The Genius Bar” – an area with dedicated support staff to answer user questions and help you learn how to use your MAC or sort out problems you may have. They like you to make an appointment – easy to do on line – but I just walked in off the street and ended up chatting to this support guy for about 40 minutes.  Not only does it now make sense how to get all my settings back, and also ended up getting tips on better quicktime codex and what to back up and well just lots of stuff.

The Apple Store demonstrates a proper approach to after sales support and what we should expect from companies but seldom receive.  Go, check out the Apple Store – have a look at the free workshops they have – gaze in wonder at the cool people who work there and get to wear T-shirts with ‘Genius’ …  perhaps going too far, just go and be glad that this is nothing like PCWorld!

As mentioned yesterday – my MAC broke. I wont go into the ins and outs of what went wrong or even how it was fixed but I will compare this experience to my experience of Windows/PC based support both by telephone and in person in the unlucky and consistently miserable occasions when I have had to visit P-spit-C-spit-World.

The first bit was most difficult – finding my Apple Protection Plan information, because it was way up on a shelf and I had to stand up to get to it. That trauma over the rest was easy!

Telephone support (based in Ireland by the accent) took a little time to verify who I was and that I had purchased the APP thing – because I’ve owned several MACs through work for around 5 years and this is the first time I’ve had to call on support. That done we tried several things which were easy to follow but didn’t resolve the problem so I was faced with a re-install. Never good news on any computer – I thought.

“Would you like to keep all your existing software, data and settings” said the nice man on the phone.

“No problem, we’ll do an Archive and Install”

OK so in Windows you can do a similar thing but in my experience it often doesn’t resolve the problems and you are left with two sets of massive files clogging up your system. Also, with the Windows install you have to baby-sit the system which requires user input at various points between long periods of waiting. Archive and Install option on the MAC meant booting from the installation disk choosing one option and answering two easy questions about 20min later job done.

However, my machine is no longer my friend. It looks like it did when I first got it. My data is there and the applications but if I open them they all have default settings, nothing is where I put it or how I left it. Normally I would have thought Oh well that’s life, I’ll need to start from scratch but no! Glasgow now has an Apple Store!

MACs vs PC – my take on the debate.

I used to participate in the PCs vs MAC war, slagging off MACs because I worked with PCs using DOS \ Windows but also UNIX and even IBMs OS2!

Then when I got into video editing it made sense to get a MAC, so for a number of years now I’ve used PCs at work and MACs at home (with a lot of crossover between the two). I then discovered that there was equal disdain on each side of the argument that is MAC users saying how useless a PC is and PC users just can’t find there way around a MAC which makes it a useless tool.

My theory is that it is fear of the unknown.

Certainly when I first worked on a MAC I felt lost, I had over 10 years of working with computers and it was as if I was sitting in front of a machine for the first time. So I felt useless and therefore ‘tricked’, after all – I’m an expert, these applications should recognise my Jedi like power and move around the screen in deference to my superior being.

On the MAC NOTHING was where I expected it to be. I couldn’t find anything, I couldn’t right click as there was only one mouse button, I couldn’t even figure out how to shut the machine back down or eject the CD!!!

But, after overcoming this initial learning curve I started to enjoy using the MAC and made a fairly quick decision that I was going to remain as a MAC user – in other words I didn’t want to fiddle about with the configuration. I have to do that with PCs at work so I don’t want to get in to it too much with the MACs. Working on the MAC became a pleasure because you don’t mess with it and it doesn’t mess with you.

PCs take some effort to maintain and service. My MAC just works!

Until yesterday – when it stopped working

I mentioned previously that I lost audio from various online videos on my mac.  While this was frustrating I’ve never had the chance to spend much time on it, and re-installing anything didn’t make any difference.  I finally found the solution and so will post it here… 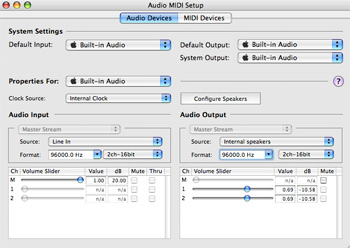 in the bottom right corner change the settings to around 44Khz and Flash video will return straight away.

I would like to explain all the reasons why this has to happen, but I can’t be bothered looking into it I’m fed up enough that this issue is so hard to troubleshoot.  I am now going to pepper the rest of this post with lots of keywords just in case others have the same problem and this solution may be found easier…