A song for Peter Mandelson

I am sure you are aware of the digital economy bill – parts of which at least is simply bonkers (an interesting Guardian article on this).  Dan Bull (who previously wrote a musical open letter to Lily Allen about copyright) has recorded another open letter to Peter Mandelson (UK Business Secretary and Pirate-Finder General with nearly unlimited powers to enforce copyright).  It is a very clever song and for sheer entertainment worth a play:

If you haven’t heard about the digital economy bill or why people like Dan are concerned by it here is the best and briefest description I’ve found:

“the Government’s proposal to cut off internet access to those who are caught illegally downloading copyrighted files. We think this has one fundamental flaw, as illegal filesharers will simply hack into other peoples WiFi networks to do their dirty work. This will result in innocent people being disconnected from the internet. What’s more, such a punishment should be dealt with in the proper way, in a court of law. This guilty until proven innocent approach violates basic human rights.”

I plagiarized this description from the number10 petitions site – if you would like to register your opinion against the digital economy bill, the petition is here.

I have been fairly indifferent to the recent news debate about proposed changes to the US Health Care system and in particular the comparisons with the NHS.  However, it is probably worth noting that one of the key editorials which has caused so much of the ‘debate / argument’ was in Investors Business Daily (IBD) which stated:

“people such as scientist Stephen Hawking wouldn’t have a chance in the UK, where the National Health Service would say the life of this brilliant man, because of his physical handicaps, is essentially worthless.”

… hey it’s an editorial opinion, not a article presented as news, so there is no need to justify the statement or give any proof for saying that someone with neuro muscular dystrophy would be dead if he lived in the UK – the only problem was that in stead of giving an anonymous example they actually named the most famous British scientist currently alive – and that is the key – CURRENTLY ALIVE and he gives lots of credit to the NHS for that fact.

One of the first records I owned was a red-vinyl 7″ single of Roxanne, but that isn’t really relevant to this post.

This is about the actual Police, who I have a lot of respect for and generally speaking I like having them around.  They tend to be handy for policing things and shutting up neighbours, etc. But I do think it is our duty as citizens (or subjects, or whatever we are in Scotland) to keep an eye on what they do and the powers they have.

So when I spotted these two stories on boing boing I thought them worth noting:

Firstly there is a story of how police seem to be ‘overstepping’ their powers somewhat in the criminalising of legitimate protest – this may be the lightest and least controversial way of introducing this video, but then again the video is obviously made from one point of view and I’ve done absolutely no fact-checking, but on the other hand it does seem to speak for itself.

The second story is that it appears in central London the police have a curfew of 9pm on any group of 2 or more under-16s, such ‘groups’ can be broken up and the police do not have to see any anti-social behaviour.  So, lets just say that again, any two or more 16 yearolds on the streets after 9pm can’t be on the streets in the center of our capital, again I don’t know the story behind this but it just doesn’t sound like Great Britain and concerns me.

BTW:  if you are even slightly interested in this, read Little Brother by Cory Doctorow – here’s my review of it.

Olympics – was she pretty enough?

I love the Olympics. Generally I don’t like watching sports but with lots of different sports happening at the same time and so many tear jerking stories of personal achievement I really enjoy the spectacle of it. It does help that it is only every four years I suppose.

In particular I enjoy this stage of the summer Olympics, i.e. before the track and field stuff starts and all we see is running or perhaps running with stuff in the way or throwing stuff or jumping in various ways. I find that a little harder to stay interested in but during these early stages there is coverage of lots of different sports – so I’ve been watching Archery, shooting, swimming, diving, gymnastics, beach volleyball (it was men’s so nothing dodgy there), cycling, hockey, rowing, canoeing, judo… and it has all been fantastic.

Then of course there was that opening ceremony! What a fantastic event, and who in the UK didn’t watch that and think “we are going to look so rubbish in 2012”? Partly that is because China spent the money and threw the number of people at the event that would ensure a good show and that is something that I can’t see happening here. But even though it was a fantastic show, more details are coming out that show it wasn’t as perfect as it looked

Firstly, some of the fireworks were faked for TV, Gizmodo spotted a Blue-Screen-of-Death during the torch lighting but today BBC reports that: “A pretty girl who won national fame after singing at the opening cermony of the Olympic Games was only miming.”

This didn’t entirely surprise me as the technical difficulties, nerves, etc. would suggest that it is simply safer to prerecord elements and mime. However, that wasn’t why they did this, it was becuase she was prettier than the girl who could actually sing better.

“The girl appearing on the picture must be flawless in terms of her facial expression and the great feeling she can give to people.”musical director Chen Qigang

Is it really necessary that the girl singing be ‘flawless’ and gives a ‘great feeling’ ? What does that reflect of the Olympic spirit?

The world we live in

I saw this ‘Quote of the Day‘ on the BBC news site and I think it shows yet another level of the horror inflicted on his family by Josef Fritzl.  I can’t imagine how there can be justice for these crimes here on earth.

A couple of weeks ago I had a conversation with a couple of American friends who both said they didn’t have TVs partially at least because they found the license fee ridiculous.  I patriotically started to defend the concept pointing out that the BBC provided radio and web content, but I didn’t feel I had a very strong argument.

Then today I found out about TWO fantastic new dramas that I really do only thing could be produced by the BBC.

Is a series of eight short dramas with top stars with each episode taking the viewer into a dramatised version of what is now known about what was going on five years to the day on the lead up to the invasion of Iraq.  I think this is a really interesting idea, but in addition to a high quality (hopefully) drama as this is being broadcast in conjunction with Newsnight (BBC2 premier news program) each one will will be followed by a discussion “with some of the real players portrayed in the drama and other key figures involved at the time.” according to The Editors blog.

Again, something that the BBC does really well.  The blurb here says “The Passion is the retelling of the last week of Jesus’s life from three different viewpoints: the religious authorities, the Romans and Jesus himself” 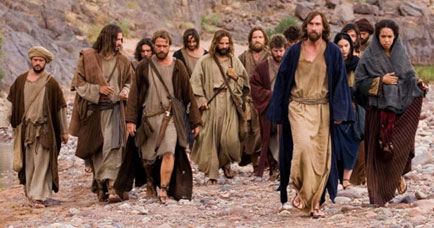 Four episodes (16th, 17th, 22nd & 23rd March), fantastic cast, and a very good web site companion to go with it including a ‘get involved’ section.

So could anyone other than the BBC produce these things?  I doubt it, and certainly not with the web sites and other additional features and teaching materials available…..  makes me feel a little better about paying for the license fee.

There was an article about this in yesterday’s Independent (can’t find a link to it I’m afraid).  The Nativity scene with a political statement has a wall separating the wise men from the stable.

The wall represents the 230-mile, six-metre high wall, topped with barbed wire and lined with guard towers, that encircles Palestine – and Bethlehem (where this is made).  Amos Trust, who are selling this say: “This is a nativity set with a difference. In 2007 the wise men won’t get to the stable.”

However, the larger version for use in churches comes “complete with a detachable separation barrier that can be replaced by a more traditional stable” presumably this helps us to keep the illusion of good will on earth and peace to all men?