I downloaded “Zero Day” by David Baldacci kindle version as a last minute thought before going on holiday mainly because it was free but I was really please with this book.  The main character is John Puller a MP investigator who rolls into a small industrial area of the states where a multiple homicide has happened only to find an undermanned local police force with a female chief of police – this is so similar to many of Child’s Jack Reacher books that I’ve read that it felt very familiar from the start. 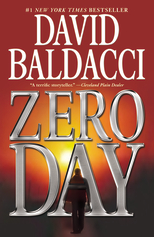 John Puller is an interesting character and I will now need to look for some more books with this character.  He is similar to Jack Reacher in his military knowledge, like for simple dinners and motels and of course being able to take on any situation with his brains or his fists – whatever is needed.

The plot itself is somewhat complex to summarise but basically some people are dead and there is no apparent motive.  The police force don’t have the manpower or experience to deal with this but since John Puller has been sent to investigate they have all the experience they need.  Then we find that the county is owned by one (bad) man, who owns the coal mining and all related industry, there is some terrorist ‘chatter’ coming from the county – is this related or not to the deaths – why don’t homeland security move in rather than leaving it all to one man…   OK the more I think about it the weaker the plot is but as you go along the book is a true page turner with a climax or cliff hanger at the end of each short chapter.

I enjoyed it very much.

This entry was posted on Thursday, September 20th, 2012 at 8:45 am and is filed under books. You can follow any responses to this entry through the RSS 2.0 feed. You can leave a response, or trackback from your own site.