Massive Attack don’t really fit any genre very well – perhaps experimental, but have also been classed as club or chill.  I don’t really know or care very much, I do like everything I’ve heard from them so when Pete suggested it I went for it.

I don’t think I’ve ever been disappointed by live music.  The show, musicianship, atmosphere – always comes together when bands perform live.

Massive Attack put on a fantastic live performance which is all about the music.  The lighting is effective but minimal using banks of LED for light and video effects.  We managed to arrive fairly early and after a quick look around went to the front to have a look at the stack and since there was space ended up staying at the crush barrier – long time since I’ve done that.  But with this type of music it was a good choice, the crowd was very good, there wasn’t much aggro (just one guy who had too much to drink and was dealt with by security). 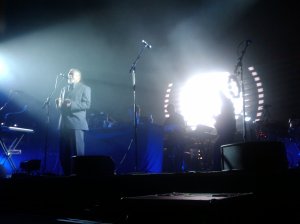 Back to the music.  I wasn’t sure if they would perform the tracks live or DJ mixing or some sort of mix.  It turned out almost everything was live with the odd sample mixed and synth sounds. Also, for what I thought was a two-piece group they had a large line up and with five mics lined across the stage it was intriguing to know how they were going to use them.  As it turned out the two main members of Massive Attack (Robert Del Naja (3d) and Grantley  Marshall (Daddy G) were joined by a drummer, guitarist, keyboard player, bass and percussion (first band with two drummers I’ve seen since Adam and the Ants back in the early 80s)… and with three other vocalists.

The best of these vocalists for me turned out to be Horace Andy – I only discovered this after the gig because he was brought on with the line “a man who needs no introduction” well I had no idea who he was.  Turns out he is a somewhat legendary reggae style artist born in 1951 and recording since 1967. In more recent years he has worked with Massive Attack and 1 Giant Leap (which is where I’ve seen him) to bring him to a new audience and he does have a fantastic vocal style and stage presence – a joy to watch.

Also worth mentioning the support act – Martina Topley-Bird.  This was strange, and really didn’t start well.  One girl (Martina) coming on to stage looking like she didn’t want to be there and some big bloke in a massive drum kit.  It took a few songs for her to warm up and relax but when she did there was a really good performance in there. She played various instruments from electronic experimental stuff to an old Wurlitzer organ and did some fantastic self sampling multi layered vocal work.  Certainly an amazingly talented person with an awesome voice – she also joining Massive Attack several times during the night.  I’m still not sure if I like the music as it is the sort of thing that needs to grow on you but that’s where spotify comes into its own!

This entry was posted on Wednesday, September 30th, 2009 at 11:10 pm and is filed under gig, Glasgow, music. You can follow any responses to this entry through the RSS 2.0 feed. You can leave a response, or trackback from your own site.