While I remember the Saint TV series I prefer the B-Movies from the 30’s and 40’s however I’ve never tried reading the original stories. 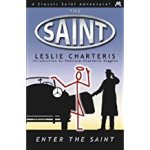 This collection of three novellas was first published in 1930.  Charters second Saint book where Simon Templar starts to get in his stride.  The stories are “The Man Who Was Clever”,  “The Policeman With Wings”  and “The Lawless Lady”.

Disappointingly I found these stories a bit laboured.  I enjoyed the 1930s environment, the slap dash nature of The Saint and a few other things but…  well it was slow, repetitive and a bit boring.

Comments Off on Book: Leslie Charteris “Enter The Saint” |

Harry is now retired, but a volunteer working cold cases for the San Fernando police.  Due to his experience he is pulled into the case of  two killings at a local pharmacy.  Bosch and the town small detective squad work this case at the same time as one of his old cases comes back to haunt him.

In the old case a murderer is about to be freed from death row due to new DNA evidence but also claiming that Bosch planted evidence.

As ever with Connelly the “two unrelated cases wind around each other like strands of barbed wire”.

Comments Off on Book: Michael Connelly “Two Kinds Of Truth” |