I watched the ten-episode TV series “Bosch” on Amazon Prime, enjoyed the character so much I started reading this book “The Black Echo” which is the  début novel of Michael Connelly‘s and our introduction to the character Detective Harry Bosch. 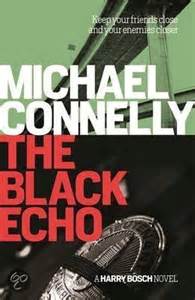 This is a ‘police procedural’ genre book set in LAPD’s Hollywood Division that starts with a body turning up of someone Bosch happens to have known in his past.  Initially it looks like an overdose but a few things aren’t right which makes Bosch push the autopsy which shows enough suspicion to turn this into a homicide.  Through many twists, gradual reveals, and good old detective work – with lots of “your off this case” from senior officers and while being investigated by Internal Affairs… Harry Bosch not only solves the case but much more besides.

There is a real depth to the characters and the descriptions of the city that bring this story alive.  Bosch himself has a troubled and well drawn past that brings his character to life – we are left wanting to know more about what brought him to this place and his current state of mind and attitude to the job and authority but these things are only hinted at.

A good read, a great character and I’ve moved straight on to the second book in the series. Great writing.

Comments Off on Book: Michael Connelly “The Black Echo” |