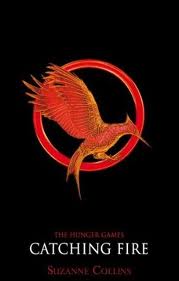 [some spoilers here if you haven’t read the first book]

A few months have passed since the end of the last book, Peeta and Katniss are triumphant tributes in District 12 and the Capitol believes they are star crossed lovers.  Part of their duties as tributes is to tour the other districts to make personal appearances, thank the adoring crowds for their ‘support’ even though the tributes from the districts that they visit didn’t survive the Hunger Games.

During this tour of the districts we start to see some signs of revolution against the capital, and that’s as much as I’m going to give away about this book.

Book 1 focused on the games themselves and only had time for a brief overview of the various districts and how the capitol controlled them.  In this book we find out a lot more, and while there is a new hunger game there is perhaps a little less detail of the violence and struggle for survival within the games than in the first book.

However, this doesn’t mean that Catching Fire is any less dark.  In fact it is possibly bleaker and more unsettling than the Hunger Games was.  What makes these books for me (as an adult reader) is the mounting suspense that bridges the story line.  Not only is there the ongoing – how will they get out of the current problem – but we also have the overall fact that the current problem the protagonists face doesn’t really matter when put in context of the ‘big picture’.

Now, obviously this book does suffer from being ‘the middle book’ meaning that in some ways it is a place keeper between the set up and introduction and the conclusion and answers.  However, within that it does have an well constructed narrative of its own and was a very enjoyable read.  I would recommend this!

This entry was posted on Monday, July 2nd, 2012 at 11:35 pm and is filed under books. You can follow any responses to this entry through the RSS 2.0 feed. You can leave a response, or trackback from your own site.