We watched Martin Scorsese‘s Hugo this weekend with a couple of young friends and in retrospect it might have been a little scary for the 5 year old, but is older brother chose it, it is a U certificate and we used the excellent BBFC web site as an additional check where it noted that the film “Contains mild scenes of danger”.  We don’t often have to choose which films to watch with children so thought it was worth making sure. 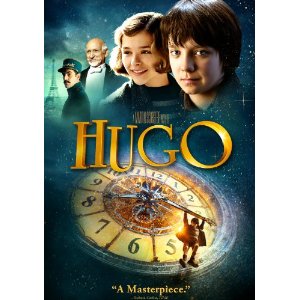 I wanted to see Hugo at the cinema last year, and I really wish I had made the effort to see this on the big screen as it is one of those films that you can truly call a ‘cinematic experience’.  This is bore out by the fact that among the many Oscar’s the movie picked up this year was the academy awards for Cinematography,  Art Direction and Visual Effects.

The film is simply packed with unique and innovative camera moves or tricks, action sequences that make you wonder how they filmed it and ‘single shot’ moves which must be partly CG to make it possible.  There are numerous vignettes that are told almost entirely visually, with no speech but using closeups, low angle or shot from above making a spectacular and spellbinding movie.

Spellbinding is a good term for this movie – which partly includes the story of early cinema during which times these visual techniques were brought into being:

The simple structure of showing these four images in the correct order – boy – cakes – hand – running – and we fill in the story in between.  The grammar of film making.

Even if all these visual niceties pass you by, the story and characters are engaging with a truly remarkable outcome which I will not go into here.  The predominantly British cast are outstanding with Ben Kingsley taking the major role but many smaller parts played by the like of Ray Winstone, Christopher Lee, Richard Griffiths, Jude Law and surprisingly Sacha Baron Cohen who I have no time for at all does and excellent job in the role of ‘Station Inspector’.

I would say this is a must see film, let me know if you agree?

This entry was posted on Monday, May 21st, 2012 at 12:14 am and is filed under movies. You can follow any responses to this entry through the RSS 2.0 feed. You can leave a response, or trackback from your own site.