We went to Browns Bar and Restaurants in George Square, Glasgow, a couple of weeks ago, just getting around to writing about it.

To start with Browns is a really nice place to be with great surroundings and atmosphere.  There was live piano music and a general friendly but high service feel to the place.  The staff were attentive without being intrusive and were certainly able to answer any questions we had.

The food and wine we all had was good, starting with a ‘Meat Platter’ that we all shared.  Then D had a Wild Boar Burger while I chose the “surf and turf” half Lobster tail and steak.

This was the first time I’ve ever eaten Lobster and I really don’t see what the fuss is about.  I didn’t find the lobster had very much meat on it and what it did have didn’t really have any distinctive flavour or texture that made it special in any way.  However, the steak was excellent as were all the other accompaniments.  D’s burger was fantastic and we all had a good meal – excellent puddings and good wine (the choice of Rums wasn’t up to much so I stuck to soft drinks). 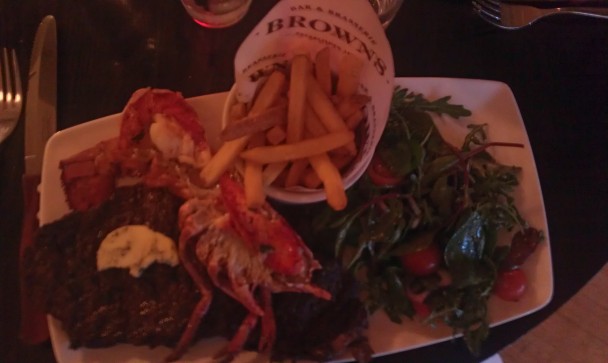 So I think I will have to say that the food was great, but I don’t really get the fuss about lobster.

Regarding value for money however, I think it was a little over priced.  We were treated to this (Thank you very much!)  by some friends and it was also subsidised by tesco clubcard points.  The quality of the surroundings and the food was such that you wouldn’t expect it to be cheap, but I still don’t really think it merited the prices they were asking.

That said, we had a fantastic evening of good food and great company and who could put a price on that!

This entry was posted on Sunday, May 13th, 2012 at 11:48 pm and is filed under grayza. You can follow any responses to this entry through the RSS 2.0 feed. You can leave a response, or trackback from your own site.