Almost a week since Christmas Day but this is the first chance I’ve had to sit down and think about it.

We moved into our new home on the 2nd of December and only a few weeks later hosted Christmas day for 9 of my lovely family, six adults and three children, including them all sleeping over so no one had to worry about driving.

This is the first time I have cooked a Christmas meal for many years, first time for this many people, first big meal in this house and first time using everything in the kitchen.  So I might have been a little stressed and a tad over prepared.  I decided to go for doing the lot from scratch and created the spreadsheet-of-doom to tell me when to do things on the day (this more or less worked for keeping things in order but the timing of each stage quickly went out the window and the estimated time of sitting down became “when it is ready”

First up, and made in advance was swede and cardamom soup, which I think worked really well but was perhaps a bit too heavy considering everything else that was to come.  Then the Turkey, which I bought from a local butcher, broke down into joints and cooked like this link – it lied by the way and took much longer than the time given to come up to temperature.  I also used that last link for a method of making the stuffing.  Along with this was the gravy, bread sauce & cranberry sauce, sprouts with bacon and chestnuts, roasted carrots, parsnips and potatoes and, of course, bacon-wrapped chipolatas.  Everything else, puddings, drinks, snacks, crackers, etc… were provided by my wonderful in-laws.

If you follow the links above you will see they are all youtube videos of the various recipes, and not all from the same chef, although I did stick to just two (with some tips from elsewhere).  By and large this was good because I like general pointers rather than strict recipes but a few time this was a little sketchy as not many quantities are mentioned in these videos, either to indicate how many the recipe is for or how much of any ingredient to use.  However, I worked it out more or less and everything sort of worked. 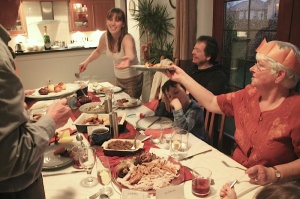 Cooking Christmas Lunch really isn’t that difficult and certainly not as difficult as I decided to make it for myself by not taking any shortcuts.  However, the lessons learned from this year might be as follows:

Above all, however, I think it is important to remember to have some really nice bread for the turkey sandwiches later on.

This entry was posted on Saturday, December 31st, 2011 at 2:01 am and is filed under grayza. You can follow any responses to this entry through the RSS 2.0 feed. You can leave a response, or trackback from your own site.