“Orchid Blues” is the second book in the series based around the character Holy Barker Chief of Police in Orchid Beach, Florida (sequel to “Orchid Beach“). 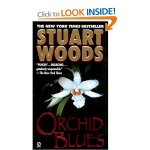 This story starts with Holy getting ready for her marriage to Jackson.  He has a few last minute jobs to do before meeting her at the courthouse, unfortunately one of those jobs includes a stop at the bank.  During this the bank gets robbed and Jackson is killed.

The investigation leads to a militia compound outside of town which quickly involves some FBI friends and Holly’s father Ham.  Ham is recruited by the militia for his marksmanship skills but it isn’t till the closing chapters that the entire plan is reveled.

Another nice little page turner from Stuart Woods to end the year.