I didn’t know about these Pratchett books about the character Johnny Maxwell, apparently there are three and are generally referred to as the Johnny Maxwell Trilogy.  Typically, I managed to start with the middle book of three but I don’t think I missed much. 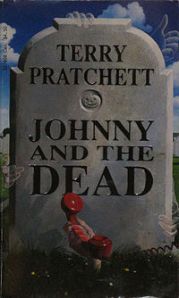 Johnny, sees and talks to dead people hanging around by their graves and tombs in a local cemetery, which is a short cut on his way home from school.  The cemetery is under threat of development and Johnny and his friends start to see what he can do to stop this.

I think this is probably classed as a children’s or teenager’s book and as such is very short and quick read.  I particularly liked the small town nature of the story with Johnny unable to find anyone famous in the cemetery but a lot of local characters.

This is a great little read and worth catching.  I now need to try to get hold of the other two books in this series.

This entry was posted on Thursday, December 9th, 2010 at 2:34 am and is filed under books. You can follow any responses to this entry through the RSS 2.0 feed. You can leave a response, or trackback from your own site.