I am a big fan of the TV Series Dexter!  There really isn’t much out there like it – the production look is what first grabbed me with the almost overexposed sepia look of Miami, then of course there is the actual murder mystery that is taking place and finally the twist of the main character being a serial killer himself.  The story is told by the main character, Dexter, and often from inside his head, with flashbacks and inner monologues. 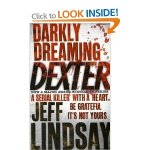 “Darkly Dreaming Dexter” is the first of Jeff Lindsay Dexter books and covers (more or less) the first season.  However, I didn’t find the book as interesting or gripping as the TV show.  Not only does the show ‘pad-out’ or add a lot to the story but the characters have more depth, the back story and upbringing is explained better and all in it is just better.  Meaning that if you are a fan of Dexter (the show) don’t expect to get more from the book.

The end of the book is totally different from the end of Dexter season 1, but I still wouldn’t say it is worth reading just for that.

This entry was posted on Sunday, October 31st, 2010 at 8:45 am and is filed under books. You can follow any responses to this entry through the RSS 2.0 feed. You can leave a response, or trackback from your own site.