book: Stieg Larsson “The Girl with the Dragon Tattoo”

I first heard about The Girl With the Dragon Tattoo as a movie and was going to go see it when Mark Kermod’s review mentioned that you really had to be aware of the disturbing violence that occurs in some scenes, so I decided to avoid it.  Then I went to the dentist and she said the book was really good – so I gave it a try thinking that it is easier to stop reading something than to walk out of a film if it was too much.  It wasn’t (for me at least) ‘too much’ however, when I saw a schoolgirl on the underground reading this book I really wanted to take it off her – it struck me that the movie is certified as 18 but there is no limitations on books.

So I better deal with the controversial stuff straight away – basically there are some disturbing stories of people’s past sexual abuse and a graphic masochistic rape scene.  However, in the book at least, these points aren’t particularly dwelt on or glorified and are integral to the story and character development.  IMHO, since these are so much part of the plot the scenes are necessary and valid but people should be aware of the nature of the plot.

That out of the way I found this a very interesting book to read.  It opened very slowly by gradually introducing two characters in their own parallel plots.  The first is Mikael Blomkvist a financial Journalist and Lisbeth Salander the strange enigmatic and mysterious girl with the dragon tattoo herself.  The slowness I felt was due to having to learn more about the financial reporting of industry in Sweden than I ever thought I would need to know.  But this does pass reasonably quickly and we settle into a strange investigation into the disappearance of a girl in 1966 which probably was her murder.  Our two main characters are drawn together by this investigation and things are slowly revieled.

This book is all about the characters involved. The murder-mystery is almost coincidental in comparison to Blomkvist’s investigation of the Vanger family members and of course the very strange but well drawn character of Lisbeth herself who by the end of the book I found myself simply wanting to read more about her, find out about her past and how she became who she is…  just as well this is the first in a series.

MMMmmmmmmm!  The BEST food I’ve had in a long time!  Astoundingly delicious, fulfilling, and sheer perfection on a plate.  I was given vouchers for this place for my birthday (THANKS!!) and without those I’m not sure I would ever have discovered this little place in Carmunnock – in fact I’m not sure I’ve ever heard of Carmunnock, before.

Mitchell’s Restaurant has a traditional small business feel with contemporary and modern decor which gives you get the immediate impression of quality – and this impression holds true!

I was slightly disappointed when the menu wasn’t the same as what I read online because I wanted to try “Pan-fried Stornoway black pudding with tomato & red onion salsa” simply because I will take any opportunity to have Stornoway Black Pudding. However, the haggis was superb and the pate seemed to go down well though I was too interested in my starter to try for a taste :-)

The starter was so perfect that I wasn’t sure how the main course could keep up, it was however awesome!  I went for the Venison, which was perfectly melt-in-the-mouth on perfect mash potato and a fabulous rich jus (sauce to the like of me) – although there was plenty I could have simply kept eating and eating this till I exploded not wanting the taste sensation in my mouth to stop!

My beautiful companion went for the Chicken mainly because it was on a bed of rice and I don’t think she can resist rice:-)  I’m sorry I don’t have the full descriptions I expected to get them online so didn’t pay that much attention but the online menu doesn’t include our main courses.  The taste I had of the chicken course was lovely (though not as good as my Venison!) and there certainly wasn’t anything left on the plate.

D’ also managed to try a poached pear and ice cream while I ended with a lovely coffee.

Mitchell’s Restaurant was a fantastic experience.  Not a cheap option at just over £60 (so again, thanks for the vouchers!) but for a special occasion I would say that this was still fairly good value for money.

who you gonna call?

Watch the video then read the full story on Improv Everywhere‘s site.

at first I thought this was a really well made ‘making of’ video of some event, it had some excellent techniques and interesting ways to show something about to take place.  Then for some time you are watching the actual event, the installation, the innovative use of falling water that I certainly have never seen before and works really well.  Then finally you get the actual message…

I was around 13 when I discovered KISS, and started collecting their back catalog.  I can still remember in 1983 hearing that they would take their make up off for the latest LP and ‘Lick It Up‘ and traveling up to Glasgow on the day it was released to see what they looked like (not a hansom bunch it has to be said).  Shortly after that saw them in concert for the first time in the fantastic Glasgow Apollo, (27/10/1983 supported by Heavy Pettin).  That was great and a year later they appeared again in the Apollo – 05/11/2984, this time supported by the unknown Bon Jovi who had just released their first LP and having seen them several times since, I still think that support set was the best I have ever seen them.

Back to KISS.  I did see them once more in 1992 at the SECC but these weren’t really KISS’s best days, and I did have my doubts about seeing them again as the recent years of KISStory have had mixed fortunes.  I would say that they went through a period where they did become their own ‘tirbute band’ putting on the make up again, reforming with the original line up (Paul Stanley and Gene Simmons have been constant since 1973 when they started).  But their latest album (19th Studio album, and first new recording for 11 years!) Sonic Boom rocks and sound very much like their early 70s hey-day.

I can say without a doubt this was the best KISS concert of the four times I’ve seen them across three decades.  Within seconds of the opening I was completely lost to the experience, I was back in the loft with vinyl, headphones and air-guitar.  This was my first proper KISS concert, with KISS in full costume, makeup, pillars of flame, rocket firing guitars, wire stunts bringing Paul (now 57) flying over the audience to the FOH position or Gene (still going strong at 60 and apparently still scared of heights) flying up into the lighting rig after his demon-bass-solo-blood-spitting thing.  Add to this the latest video and lighting technology, new songs and enthusiasm of a sellout Scottish crowd which surprisingly included a lot of people who couldn’t have been born in 1983 when KISS played the Apollo!

Basically this was full on KISS THEATER with all the old-school tricks mixed with the latest tech.  But don’t take my word for it … here’s the video I made :-)

Went to York for the long weekend May bank holiday.  It’s a great little place to visit with an awful lot of past.  In York they have Past that goes all the way back to AD71 and they are very good at telling you about it!  I think having so much Past makes it an interesting city and great place to visit, because there has been various settlements in exactly the same place since AD71 and it is possible to see evidence of all of these.  At some point (I think sort of Victorian times, but I didn’t take notes) the city council was about to tear down the old city walls and ‘modernize’ all those little narrow streets – and that was stopped – which means that York has layers of change up to a certain point at which preservation and excavation took over and now tourism to look at old-stuff. 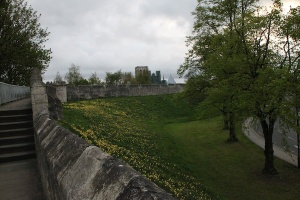 The City Walls are interesting in themselves, but also the areas of little narrow streets around the Minster which gives the place that quaint historic look.  However it is difficult to get your bearings, you start to feel smug about knowing your way around when all the locals come out at night and move the streets around like a giant sliding puzzle.   I believe this may be some form of ancient city defence mechanism which is a fall back in case the walls fail to keep out the enemy – simply move streets and landmarks around randomly until they leave in the confusion.

York Minster itself is impressive, and well worth the entry price – especially since photography is permitted.  There is a lot to see and it seems to always have been an active practicing church which hasn’t been lost to simply being a tourist-venue.  There is a built in aerobic exercise of climbing hundreds of stairs to get to the top of the main lantern-tower which does have incredibly views over the city and surrounding countryside.  Again, this is an extra payment and quite a challenge but worth it. 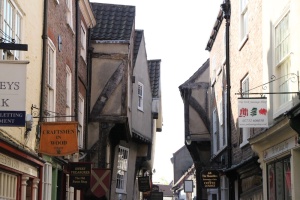 There are a number of other things to do and see in York, the more famous of these being the Yorvic Viking experience and the National Railway Museum – neither of which interested us so we didn’t bother with.  We did visit Cliffords Tower, almost visited the castle museum, looked around the art gallery (wasn’t really impressed with that), and looked at some old churches, and Waterstones.  There was also a market each day we were there over the weekend and lots of interesting shops in the winding streets to explore. 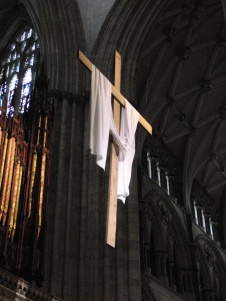 Food, however did seem to dominate a little as we were in pursuit of an elusive concept of a roast beef dinner served up in a giant yorkshire pudding.  At first we sort of assumed this would be easy to find, but couldn’t see anything like that on any menus.  We started asking around, first some of the guides at the National Trust property we visited (Treasurer’s House), someone in the National Trust shop, the guest house owner, etc.  all we really got was ‘some of the pubs might do that’ or ‘I’m not really sure where you would get that’.  … We didn’t manage – our last attempt was to go into a restaurant which was in a really old building and had chalk boards outside with things like ‘real Yorkshire Roast’ and ‘Faggots and Pease Pudding‘ etc.  This turned out to have those things along side pasta, snacks, etc. and we were served by an Italian, German or Eastern European and a Chinese guy.  After asking how they served their roast beef we both went for burgers – which were excellent but we didn’t ever see any ‘giant yorkshire puddings’. 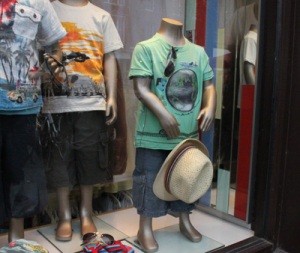