movie: Exit Through The Gift Shop

This film is having a very limited release but I’m really glad I caught it at the GFT tonight.  “Exit Through The Gift Shop” is or might be a documentary about street art.  It is the first movie by Banksy and has various tag lines like: 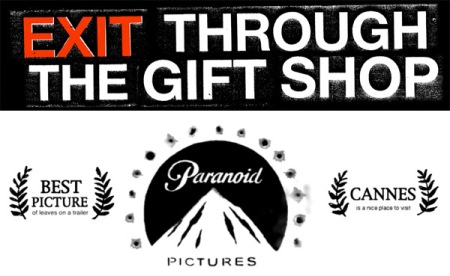 However, it is a little tricky to know where to start with this because it is “semi-fictionalised documentary” so there is no way of really knowing what parts of the story are true and what has been re-created for the camera.  I also found it difficult because in general I don’t like what is termed ‘street-art’ that I simply see as graffiti and vandalism, while at the same time I do like a lot of Banksy’s work.

OK, now I’ve got that out of the way I have to say I really really enjoyed this film.  It starts out with a simple documentary of how a French guy called Thierry Guetta is obsessed with recording everything on video and who then stumbles into the ‘street-art’ scene. Then it starts to creep up on you as less and less serious and increasingly ludicrous and funny.    Above all, this is simply a very, very funny story poking fun at the art world and an extremely enjoyable film.

This entry was posted on Tuesday, April 6th, 2010 at 11:29 pm and is filed under art, movies. You can follow any responses to this entry through the RSS 2.0 feed. You can leave a response, or trackback from your own site.

One Response to movie: Exit Through The Gift Shop