Micmacs is a nice little french film by Jean-Pierre Jeunet (Delicatessen, Alien: Resurrection & Amélie) at the GFT.  The movie is a colorful, quirky and other-worldly that tells the simple story of Bazil, who is shot in the head, survives but the bullet can’t be removed – oh and his father was blown up by a landmine 30 years earlier.  Doesn’t sound much fun yet does it? 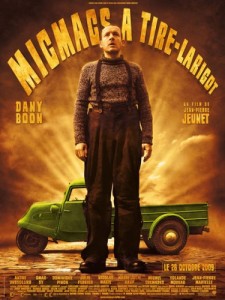 Bazil, gets by with some interesting street performance and eventually falls in with a strange group of misfits in an underground world of their own.  Then he finds the arms manufacturers who made the bullet still in his head and their competitors who made the landmine that killed his father and starts to set them against each other.  After some comical misadventures they kidnap the two heads of the rival firms and… well I can’t give that away but its a nice twist.

It is a lovely little film with lots of laughs, chain reaction situations and well shot with incredible color schemes making a larger than life fantasy world.

By The Way: this is a great story and character based movie and wouldn’t have benefit in any way from being 3D – we don’t need 3D movies!

This entry was posted on Friday, March 5th, 2010 at 11:04 pm and is filed under movies. You can follow any responses to this entry through the RSS 2.0 feed. You can leave a response, or trackback from your own site.