Trafalgar Square: if you are in London you have to visit this place.  It is (again) bigger than I had remembered and a simply awesome space both for the feeling of openness and closed in by the dominating surrounding buildings and traffic flowing towards it.  This is also a place where so much has happened over the years and yet it still struck me as a little surprising that the whole place is in fact a monument to Empire, great warriors and most obviously I suppose the battle of Trafalgar with Nelson on top his column and lots of Naval type sculpture.     Anyway, perhaps more of this later, when I arrived in the square it was late afternoon so time to rush on. 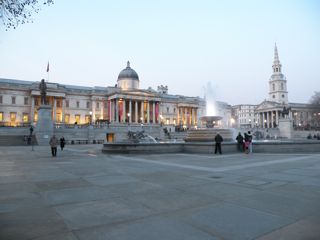 My fifth main target for the day was The National Gallery, which makes up more than one side of the square.  However, by the time I made it I only had 45 minutes before they closed – therefore Museum Technique #4, is a slight tweak to #3 by saying to the staff at the information desk “If I only had 45 minutes what should I see”.  At The National Gallery the map made great sense, the works here were separated by time periods and in each collection there were some highlights mentioned and which rooms they were in.  I immediately gave up on seeing much, went into the first room and stuck to that collection.  Incredible!  Again I really can’t do it justice here so perhaps given more time, and if I get the chance later in the week I will come back here because 45mins is ridiculous.

To end the day I aimed for St Martin-in-the Fields (which isn’t) and got tickets for The Belmont Ensemble of London which is part of a week long Mozart Festival.  Now, my original plan was to try to visit Trafalgar Square at some point this week around lunch time and take in one of the free lunch time concerts at St Martin-in-the Fields (which isn’t).  But there was no way of doing that today but now it was in my head I really wanted to go to this.  I’ve not been to many classical concerts but this is more due to lack of momentum than lack of interest.

Before the concert I grabbed some dinner in the crypt café – downstairs in St Martin-in-the Fields (which isn’t) – which is a very impressive modernization of this ancient crypt space.  Also, to call it a café doesn’t do it justice, as although it is self service the quality is very high and is very good value for money and a very nice space.  I would highly recommend anyone visiting London aims for Trafalgar Square at lunch time, to eat in the crypt of St Martin-in-the Fields (which isn’t) and even possibly catch a lunch time concert.

The concert itself was just a perfect fir for my day of wondering these old historic streets looking for the whys, hows and whats of London streets, churches and museums.  The beautiful, traditional church building had great acoustics carrying every detail of the performance.  They played a mix of Mozart and Handel, which confused me as this was a Mozart Festival, but what do I know.  I was also a little disappointed that neither Mozart of Handel were actually there – this must have been some kind of tribute-act ?!

The building itself has many nice architecturally touches, flamboyant chandeliers and sculptures.  However what really caught my eye was the main window which is very modern and intriguing. 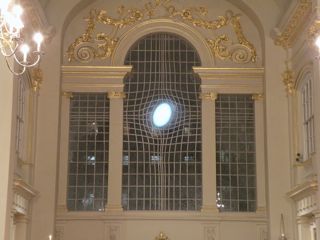 It is almost entirely clear glass with the white led (I think traditionally it would be lead but I couldn’t get too close to this) creating lines, which start as a plane grid but moving towards the center create an optical effect of a cross.  At the middle of the cross is an off-set oval piece which is, or appears to be light.  I think, this piece of glass is etched or opaic   !!! but may also be lit at some angle, but although I did try to investigate I couldn’t figure out what was going on. Also, when I went outside to see if it was back lit (which it wasn’t) I noticed that the window is also distorted i.e. not in a single flat plane.  Anyway, I will do some online research eventually, but for me this window is so simple but striking and says everything about God being at the center of everything, at the center of the cross, God as light, the sacrifice of that light, that light still shining even though the cross is empty, the cross is ethereal, we don’t see the cross in this window but it is represented and alluded to…. OK I’ll stop, after all, on the other hand it is just a window.
[update: found some more info  – “The one controversial note struck in the otherwise impeccable interior is a new east window by the Iranian-born artist Shirazeh Houshiary. This appears to depict a cross as if seen reflected in water, a work of rippling lines seemingly at odds with Gibbs’s classical forms.” ]

After the concert it was back out to Trafalgar Square which is a very different place at night than in daylight.  I could, but for the moment wont, wax lyrical about this place but instead I will just let these two photos sum it up. 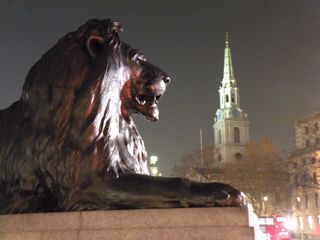 This entry was posted on Thursday, January 28th, 2010 at 12:17 pm and is filed under grayza. You can follow any responses to this entry through the RSS 2.0 feed. You can leave a response, or trackback from your own site.