Celtic Connections is on at the moment and for the first time I went along to the Celtic Connections Festival Club.  The idea of the festival club is that it starts at 10:30 and bands who have been playing at other venues might drop by and join in.  “With inspired line-ups that are never divulged before the night – the Festival Club draws musicians and fans alike for a late-night jam session to end all jam sessions.”

This is fair enough since I don’t know many of the bands, so I thought that this might be a good place to get to know some bands that you can then look out for at other times.  The festival club takes place at the Art School, which was cold, and the whole thing doesn’t flow very well because of the set changes, but there is a good atmosphere with lots of folk out for a good time and willing to listen to whoever simply turns up.

The evening started of with some traditional Scots Singing from the “well known Scots singer Doris Rougviie” OK, so I hadn’t heard of her and Scots isn’t my really my thing but it was OK.  Then there was a couple of Irish blokes who sung and played some really slow (and boring) sad, depressing, songs – they were musically talented and all but not really a mood enhancer for knocking on midnight. 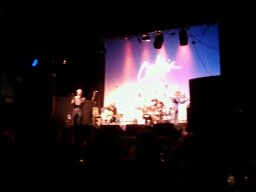 However, after that things really stepped up a notch firstly with the Brian Finnegan Quartet who were fantastic, playing a lively set.  The quartet is made up of Brian himself playing many different types of flute and whistles, a drummer, fiddler, guitarist and sometimes double bass.

They are playing this Saturday at the Classic Grand, if you are free this looks like a good gig. 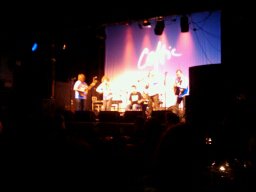 After the inevitable stage re-setting and odd sound check noises which seems to take forever the next group on stage was Guidewires, who had played earlier in the evening at the Strathclyde Suite of the Concert Hall.  Guidewires are a traditional Irish band with some influences from Balkan and Middle Eastern music.

It was a great night and I left as Guidewires came off stage and there was going to be at least one more band coming on.  The Festival Club cost £8 and starts at 10:30 on most nights of the festival.  It is a bit pot-luck, but a very good night.