Don’t Panic is sort of not a biography of Douglas Adams, and it isn’t really a companion to the radio series/book/record/theatrical release/TV Series/computer game/sequels/movie/web site “The Hitchhiker’s Guide to the Galaxy”.  It is in fact slightly difficult to classify. Until that is, you read the back cover which sums it up well “Don’t Panic celebrates the life and work of an ape-descended human named Douglas Adams…” 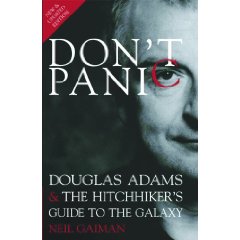 The book was first released in 1987 and has since had several updates to include Douglas Adams death in 2001, the film release in 2005 and this version went to press just before the release of the ‘new’ Hitchhikers book in 2009 And Another Thing by Eoin Colfer.  I really liked this book almost because of the way it has grown over the years.

Mostly it consists of a loosely chronological introduction to Douglas Adams and how he came to the point of writing Hitchhiker’s and then follows through each reinvention of the story for different media, as well as his other ventures with The Meaning of Liff, Last Chance to See and the Dirk Gently novels.  However, as this book was written with Douglas Adams participation and while some of these things were going on the interviews seem fresh and relevant to what was going on, not reflected memories tainted by subsequent knowledge.   There are lots of little insights into the characters, plots and of course the author who created them and some wonderful snippets of unused script and fan letters.

Just over 6 months ago I borrowed the full set of radio programmes to listen to while decorating so I thought my memory of these stories was fairly fresh, but this little book added a certain level of depth that I would recommend to any fan of Adams work.  The thing that surprised me most in reading this was just how small the world of British comedy is (or at least was), the same names keep coming up for producing, directing, writing, re-writing or editing such things as Hitchhikers, Not the Nine OClock News, Blackadder, Monty Python, Dr Who (the last of the old versions at least, if you follow), Spitting Image, even QI … it seems that a great deal of the BBCs best drama and comedy comes from a very small group of people.

This entry was posted on Thursday, January 14th, 2010 at 8:13 pm and is filed under books. You can follow any responses to this entry through the RSS 2.0 feed. You can leave a response, or trackback from your own site.