Yes, another Stone Barrington story by Stuart Woods.  Cold Paradise takes Stone from New York to Palm Beach in Florida, but of course being Stone he is taken on a very rich client and travels, eats and stays in the utmost luxury. 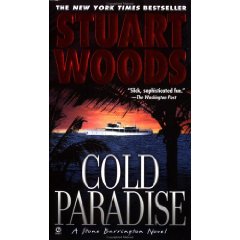 Of all the books in this series I’ve read this one is has the most preposterous plot which brings almost all the characters that we have met before back in one story. I particular we meet again Allison and Paul Manning who we first met in “Dead In The Water“.  Dolice is also in the background again (although we thought that we had seen the last of her at the end of the previous novel) and of course the long running on-off relationship with Arrington continues.

However, even with these three women who Stone has (of course) already slept with he still manages to jump into bed with the only other female character.  As mentioned the plot is more than a little ‘out there’ simple because a new client comes to Stone asking him to track down a ‘Liz’ with so little information it seems impossible – Stone goes to Palm Beach, sleeps with first woman he meets, goes out for dinner, spots his ex-client Allison Manning who is supposed to be in hiding (because she should have been executed)… not only has he happened to bump into her but of course she turns out to be the ‘Liz’ that he is looking for.

If, however, you can put that aside the plot is typical of this series.  Very fast-paced, easy to read, page turner with cliff hangers and twists that keep you guessing.  This certainly hasn’t put me off these Stuart Woods books – which is good because Lou has just passed me the next SEVEN books :-))