Michael Caine plays Harry Brown, a pensioner who loses his wife at the start of the movie and his days consist of drinking and playing chess with Len in a run down pub in a run down London council estate.  The estate is becoming a wasteland controlled by violent youths dealing drugs and bringing fear to everyone who lives there.  When Len has had enough of living in fear he confronts the gangs and is killed, leaving Harry with nothing. 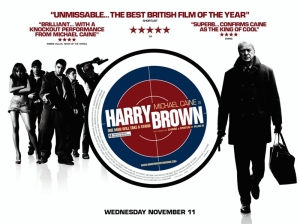 This is a very dark opening to a movie and when Harry, tries to find who is behind it and why the police can’t do anything it takes him back to his days serving as a marine in Ireland and begins to take things into his own hands.  This is a dark, violent and realistic looking movie, it is also an extremely watchable character based thriller with a surprising ending.

Michael Cain is excellent in this film!  In particular the opening section as the character develops we see him as a tired old man with nothing to live for and trapped in a flat surrounded by violence.  I wonder how he felt about this as it was apparently filmed around the Elephant and Castle where Michael Caine grew up – did he compare his life with what he portrays here?