I recently read “Lamb: The Gospel According to Biff, Christ’s Childhood Pal” and found it a very good and extremely funny read.  So I picked up The Stupidest Angel also by Christopher Moore, and just finished it. 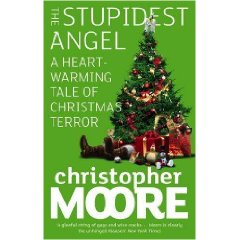 This story is set in a small town in California on the lead up to Christmas, where the angel Rasiel is sent to earth to grant a Christmas Miracle.   Meanwhile someone (accidentally) kills a man in a Santa costume, she wants to call the police but is persuaded by a passer to hide the body beside an old graveyard, mainly so that he can get to know her better and doesn’t have to spend Christmas alone.

The local sheriff runs over Rasiel – who gets up and walks away since he is an angel – this drives the sheriff to his pot smoking habit.  Meanwhile the sheriff’s wife is off her meds, which isn’t generally a good thing because she tends to take on her former B-Movie character of “The Warrior Babe of the Outland” and wonder around with a broad sword.

It turns out that a small boy also saw Santa getting killed so thinks that Christmas will be somewhat a let down and Rasiel asks this boy what he wants for his Christmas Miracle.  This is how the angel Rasiel ends up standing over the grave carrying out a miracle to raise the dead… this is a little bit careless because, as mentioned, santa is burried beside a graveyard and the raising of the dead miracle isn’t restricted to just the one body.

That’s why the annual Christmas party in the church hall is interrupted by the sudden appearance of zombies hungry for brain, and the Warrior Babe of the Outland and a slightly stoned sheriff.

OK, so I’ve given away a fair amount of the plot here, but the book is more about the journey than the plot.  There are a lot of characters in this book, and I found it hard to keep up with who was who a lot of the time, but the characters are all well written and the plot moves along at a good pace.

I think this is a little more for fans of the author who have read more of his material than I have because according to a short explanation of what other books various characters appeared in before.  I didn’t like it as much as LAMB, but it was an entertaining read.

This entry was posted on Thursday, October 15th, 2009 at 4:49 am and is filed under books. You can follow any responses to this entry through the RSS 2.0 feed. You can leave a response, or trackback from your own site.