I like Death.  I’ve worked my way through the Guards series of Pratchett books and now I’m working through the Death books and he really is a fantastic character.  ‘Reaper Man‘ follows ‘Mort‘ which I finished earlier this month but really the stories don’t (and don’t have to) follow on from one another.  This is one of the characteristics of Terry Pratchett’s writtings I really like and something that I wish I had known earlier. 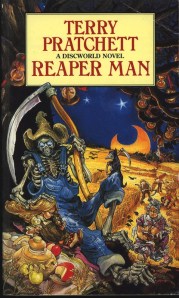 I had heard about Terry Pratchett and to be honest the thought of reading about some fantacy nonsense about a flat world on the back of elephants on the back of… etc.  never really interested me. It gave the impression that you had to geekily know all the background info and fokelaw to get anything out of it.  I assumed that you would have to start at the begning and work your way through or nothing would make sense – and that’s a lot of books to take on.

Now I think ( and I’ve not read them all so this may not hold true for all his books ) generally you could pick up any book, read it on its own and get a lot of enjoyment out of it.  The more you read the more you know about other characters and places but there is no great loss in not knowing these things.

In Reaper Man for example we meet Sergeant Colon of the City Guard on a couple of occasions talking to the unfortunatly not-dead Windle Poons.  This is fine, he is simply a side character in a couple of little incidents, unless you have read the books telling stories about the Guards in which case you know this guy very well and can tell exactly why he is guarding a bridge in case someone tries to steal it rather than doing something more ‘useful’ that may involve actual effort.

If you have never read any Pratchett start with Guards! Guards! – it seems to be a fairly safe bet.

So Reaper Man:  It is decided that this Death has too much character and so he needs to go.  He is given time, being a creature that lives outside of time this is new – so he goes off and works as a farm hand – reaping the harvest (one stalk at a time, but still very fast).  Meanwhile with no Death to collect the life force as people, animals, plants, etc. die there is a build up of excess life force not knowing what to do with itself.  Some tries to develop into a shopping mall but only partially succeeds. The Wisards go into battle against a compost heap and a small girl’s time runs out.

The highlight for me in these Death books so far is the general discovery of new things by Death.  Simple things like time passing, sleep, and so on.  It is very well described and often very moving, almost like Death has a soul – he doesn’t, but like that!

This entry was posted on Friday, February 27th, 2009 at 1:56 am and is filed under books. You can follow any responses to this entry through the RSS 2.0 feed. You can leave a response, or trackback from your own site.