I’ve wanted to do this since first moving into this place nearly 9 years ago but it is a large project for my limited but enthusiastic DIY skills and scares me a little.  I’m also very poor at planning DIY projects.  I tend to start them, then get carried along by their momentum till the project declares itself finished and lets me get back to my own life.

The plan for today was fairly ambitious, but potentially achievable if everything went well.  Everything, however, had other plans which didn’t include ‘going well’ as far as I have grown to recognise the concept of well going.

The aforementioned ‘plan’ was to start as early as possible (today being Saturday that meant about 9:30ish) by getting all the tiles off the wall.  I knew this task would involve a lot of noisy hammering which may disturb some of my neighbours, but I still didn’t feel like getting up any earlier, so 9:30 it was!

This then is the first thing today that I’ve never done before – take tiles off a wall.  The first section was fine, it was hard work and lots of plaster came off with the tiles but it can be patched and new tiles will be going in the same place so not too bad.  The second, larger area, of tiles wasn’t so convinced that they wanted a change of outlook.  Here the tiles were so attached to the wall that the wall has come with the tiles… 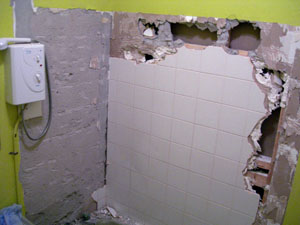 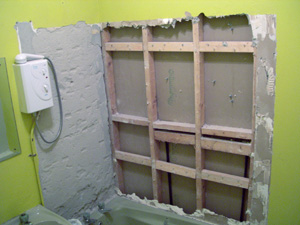 The wall on the left (above the taps) is plaster over brickwork and will be OK after some patching,  the other wall is (or was) plasterboard which now needs replaced.  Which brings me to the second of today’s ‘things I’ve never done’ I’ve never removed a plasterboard wall.  Being a person who doesn’t remove plasterboard walls has generally been OK with me and is a condition would like to have continued in, mainly because I have no idea how to put one back up.

The other side of this wall is my kitchen.  I was wondering for a bit if I could put in some kind of hatch or window so that I could reach the toaster from the bath or I could chat to guests using ‘the facilities’ while I was making them a coffee, for example.  But I think, all things considered, I will simply have to try to reinstate the wall as it was, somehow.

This entry was posted on Saturday, February 7th, 2009 at 8:50 pm and is filed under grayza. You can follow any responses to this entry through the RSS 2.0 feed. You can leave a response, or trackback from your own site.