Book: Kate Summerscale “The suspicions of Mr Whicher or The Murder at Road Hill House”

“The suspicions of Mr Whicher or The Murder at Road Hill House” by Kate Summerscale is the first non-fiction crime thriller type book I’ve read for some time and probably the book with the longest title I’ve ever read. 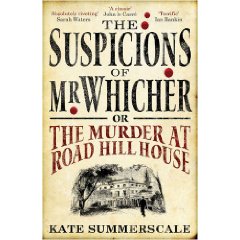 This story is based around the real life, gruesome murder of a child Road Hill House in 1860 which was apparently very famous, shocked the country and exposed many scandals going on in this Victorian country house.

At one level, that of the historic account of what happened, this is an interesting and difficult to resolve case.  However, what makes the book much more interesting the affect that this one case appears to have on all detective fiction.

As the author explains very well ‘The Detective’ is a very new invention of the time.  The first police force, The Metropolitan Police, were set up in London n 1829, and “In June 1842 the commissioners asked the Home Office for permission to set up a small detective division: they argued that they needed a centralised, elite force to coordnate murder hunts and other serious crimes that crossed different police districts.”  There seems to have been much public resistance to what was seen as spying because these detectives were in plain clothes – much of this argument reminds me of current civil liberties arguments against such things as CCTV.

So when a high profile horific murder takes place and local police appear to be ‘clueless’ a detective is sent from this new elite group.

The book outlines Victorian social values and class system.  It explains where and how words like ‘clue’ come into common use. The begining and growth of detective fiction. It is extreemly well researched with so many facinating details woven around the real life story  that it is hard to put down.

This entry was posted on Tuesday, January 20th, 2009 at 12:47 am and is filed under books. You can follow any responses to this entry through the RSS 2.0 feed. You can leave a response, or trackback from your own site.