The return of the great Glasgow alphabet meal – where each month a few of us go out for a meal choosing a restaurant beginning with a different letter of the alphabet each time.

H was tricky, and the best we could find was Rab Ha’s – 81 Hutcheson Street, Glasgow G1 1SH (map)

Rab Ha’s is an excellent little place hidden in the heart of the Merchant City, that said I’ve never actually eaten in there before. We had some difficulty finding the restaurant’s entrance and ended up going through the pub to get to it. We actually walked right past the entrance but because of smokers outside it didn’t look like an entrance, we then still had to push past two other smokers at the pub entrance who just didn’t move aside much. 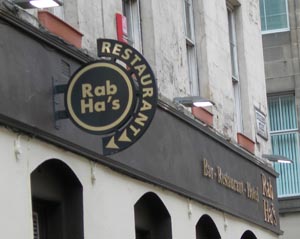 The restaurant is downstairs, it was fairly quiet which wasn’t surprising early on a Monday and we went for the Pre Theater Menu (even tho’ we weren’t going anywhere afterwards). There was no-option really for me since whenever I see Stornoway black pudding I have to have it. You see, my mother was from the Isle of Lewis and black pudding from MacLeod’s butcher was something we only had when we visited. Black pudding isn’t something I eat much of because it isn’t very nice, but Stornoway black pudding is just better.

So, I went for “Marinated Pork chop spiced apple sauce and Stornoway black pudding mash” and the others had “Pan fried Sea Bass fillet crushed potatoes and sauce vierge”

The Pork was cooked really well, the apple sauce was nice but the mashed potato with Stornoway black pudding flaked through it was fantastic, just to add that slight depth of flavour – really really good! The verdict on the Bass was “12 out of 10” but then we started talking about something else so I didn’t manage to get any explanation for this. Then we moved on to puddings :-) 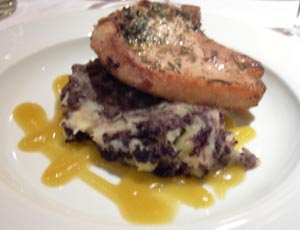 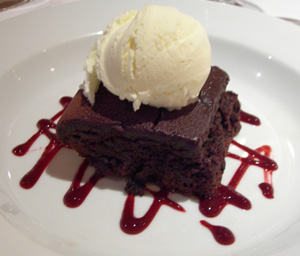 However, while I can’t complain on the quality of the food or the service and at £14 it wasn’t bad. The thing is I was still hungry when I got home and ended up having beans on toast :-<

This entry was posted on Monday, April 7th, 2008 at 11:19 pm and is filed under Glasgow. You can follow any responses to this entry through the RSS 2.0 feed. You can leave a response, or trackback from your own site.