Building for the Future

All the info on Building for the Future project is now out there, so here are the links to the video work.  The full 14 min video is on googlevideo …

I’ve had my head down for a few weeks working on a video project.  Most of the video work I do tends to fall into the following:

wallpaper – artistic, thematic sequences designed not to be the main focus, such as clouds passing, candles flickering, circling around a cross, footsteps in the sand, etc.

point making – short films focused on a theme or making a point, such as a dramatized Psalm reading, illustrating a letter being written, vox-pops, or the Jesus of Revelation, Names of God, type thing.

history – simply a record of events because I have to footage, such as Stonehaven, Wanlockhead May 2007, Easter 2007, and the Deeper setup

silly –  spoof or funny short videos, few of which have gone online apart from Jake on Balloon

This latest project was different in two respects, firstly there was a very tight time scale and secondly there was no clear remit for what was needed.  It was an awareness raising / fund raising project, but that was all no one knew exactly how it was to be presented.  Anyway, I started filming some interviews and film cutaway footage of ‘church life’ with no idea how this was all going to fit together. Eventually it did come together and tomorrow is the launch of the new project.

One interesting point is that I shot some footage of people arriving at church from across the road, however I was running late so everyone I filmed was actually arriving after 11am for the service – we know who you are :-)

OK, I’ve been messing about on facebook for a while.  I actually joined lots of these social networking sites last year for something we were talking about at work (*) So I had sort of forgotten that I had signed up to these things when this year suddenly I keep getting friends requests.  I started to accept these and changed my profile to say that I probably wont use this, but I still keep getting ‘poked’ and invited to ‘pillow fights’…  So just in case I am offending anyone by ignoring all these – I don’t like facebook, I don’t ‘get it’, I am looking forward to hearing what Simon discovers from his trip into this area and I don’t think that people who use it are lacking in any way, sad or silly (**), I just don’t think I can be bothered.

Anyway, today this bloke blogged this video and I like it so I’ll blog it too…  (I particularly like the equal division of facial hair among these two guy in the video)

(*) I work in higher education and this was to see if existing social networks that students were involved in could be used within study life at University.  Personally I came to the decision that it is better not to do this so that we aren’t blurring those work-life boundarie, social networks are for socialising while VLEs are for learning.

(**) I can that the facebook vs non-facebook community could become as divided as the Windows vs Mac wars.

“Graham is now standing up, but might sit down later”

“Graham is looking over there”

Can you tell I don’t see the fuss about Facebook. 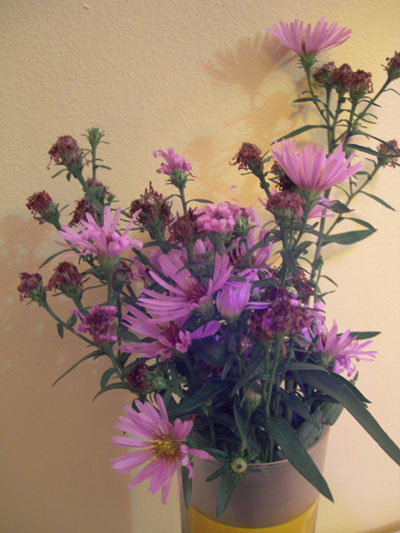 It’s not often that I’m given flowers by a beautiful girl, but I was given these today which was really nice.  They were hand picked and very very special!

One Day, in church?

We had a one day conference at St Silas today. With Malcolm Round from St Mungo’s Balerno (mp3s of morning and afternoon sessions), which was great.

As well as the worship, teaching and ministry there was time for lunch.

During the afternoon session however I got distracted and started to think about how we could improve the entrance way to the church, you know first impressions as people walk in….  as you can see from this photo there are a few posters that are out of date, the desk is a bit messy and broken, there is uncollected mail and lost property and someone has left one of the preachers lying around.  We really should tidy up after ourselves :-)

How to read Pratchett

I, decided to follow up my recent Harry Potter experience by reading another

. There are so many Terry Pratchett books that it is hard to work your way though them if you haven’t read many. I was put onto the ‘guards series’ by Lou from Biblocafe and ‘student Mark’, but it is still difficult to navigate through all the books available.

But now I’ve found this to help with which order to read the books, all I need now is to keep track of which ones I’ve already read…